Transgender children have once again been in the news spotlight, following the NSPCC’s cancelled debate and the somewhat confusing story of a possibly trans child taken away from their mother.

A spate of troubling Daily Mail headlines ensued, attacking the charity Mermaids and the BBC and stirring up some hefty moral panic about children being encouraged to be transgender, as if it’s possible to make somebody trans when they are not. . .

Read the full article on my professional site

You get used to living with a serial killer after a while. Kitty is awful cute but never lets me forget she’s a murderer.

Don’t let the cuteness fool you

Today, one got away. I scooped kitty in my arms while my partner rescued her mousy prey. Her heart was beating fast, and I calmed her, having learned that cats are in a heightened state when hunting and easily upset.

Yeah, I comforted the killer and she went all soppy-cute in my arms once she realised she wasn’t going to be able to get back to her nasty game. And as I did so, I had a bit of an epiphany.

Because when holding that cat I realised she was almost as frightened while she was attempting murder as her prey had been. Afraid of getting bitten, I guess, afraid of the random chance of her prey getting her back and disturbing the natural order of things.

It closed the circle on something I have been mulling over for a while. I’ve long since realised that when we go into our primal places it becomes impossible to distinguish between frightened and frightening, hence the way people often attack scared, vulnerable people. It makes sense, I suppose – mice will bite cats if they get the chance, and so if you know people are terrified of you then it makes a perverse sort of sense to fear what they might do.

This lesson has taught me something I have been trying to grasp about both local and global issues. I’ve been having a bit of trouble lately from people more comfortable and less disenfranchised than me. Often these people are white, cis, well heeled, male. Generally they are red-faced and angry. These folks attack me with such ferocity that you would think they were the real victims. And the thing is, I understand they do believe they are. Victims, of course, of mouse bites that cats feel they do not deserve. They will have you believing, before long, that mice will be safer if they just file their teeth down a bit or volunteer to never bite.

“You can’t say anything nowadays” they cry, frustrated that their freedom to be thoughtless and excluding might be curtailed. Although it rarely is. It turns out (just look to the cover of the Daily Mail for proof) that you really can say anything these days, and people general do, unconcerned about the impact their words may have, and not quite so bothered by the protests of “political correctniks” that they make any effort whatsoever to adjust the drip, drip, drip of their toxic language.

I do believe these folk see me as some kind of threat to them when I talk about including trans people, or people of colour, or being disability aware, or just plain kinder. 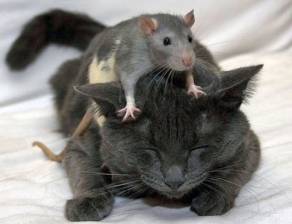 They are so worried about getting bitten. Not just worried, they are scared and angry and ready to attack.

And when I look at Donald Trump, and the white middle classes that voted for him (it’s an absolute myth that the genuinely disenfranchised voted Trump), I see that same fear. No matter how much power a person has, there is still this fear. In fact, I swear the more power people get the more fearful they become.

Maintaining power and position over others comes at a cost. The cost is a constant, and quite unreasonable, fear. The cost is you will never feel safe enough, secure enough. We are creatures of the desert, born to be frail, to be vulnerable. To be dependent on each other for support, community, survival. We were not meant to be in competition with each other, to build walls around ourselves. The more we build, the more others will try and tear those walls down. The walls are futile. Borders are futile.

As long as there is a border, there will be people clamouring to cross it and there will be anger and fear created in the divide.

Humans are not natural predators, whatever we may tell ourselves. We are natural pack creatures, and omnivourous scavengers. Dogs just don’t eat dogs, and mice don’t generally hurt other mice. Butterflies get by without killing anyone. Not all of nature lives by the principle “kill or be killed” and humans certainly can choose not to.

Our sense of safety will always be reflected in how it is for the most vulnerable among us. Because in our hearts we know what we are doing to those people. Our fear of them biting us is exactly proportional to our unconscious knowing of how much we threaten their safety and wellbeing. Safety and wellbeing, of course, is afforded by full rights, inclusion and care as part of the pack.

Donald Trump is a fearful man because he feeds off other people. White people are a fearful race for the same reason. Certain cis gay white men that I have had the misfortune to be attacked by lately are fearful too, maintaining their position on the upper side of society by keeping other LBTQ people at bay. Fearful their position of power within an artificial social order may be undermined, fearful they may become every bit as vulnerable as the people they exclude and oppress.

Most of all, these people are afraid of themselves, or rather, they are afraid of what would happen if they found themselves in the position of a mouse, in relation to others who act exactly as they do.

Someone really needs to give these cats a cuddle, but let’s be clear; that’s not the mouse’s job. Ultimately, people who chose to be predators are responsible for their own predicament. Unlike our feline friends, it’s a choice, not an instinct.

Run free little mice and bite cats whenever you need to. But do not envy the fearful cat.